After our scary movie Christmas tree excursion, I was determined to have magical Christmas morning. P.’s family was staying with us, so I had visions of coffee and hot chocolate, waffles and omelettes, opening gifts by the light of the tree.

I woke up bright and early Christmas morning… to a loud explosive bang. P. and I jumped up out of bed. As we heard another explosion, we saw a bright white light in the distance out our bedroom window. At that same moment, our entire house lost power. We watched as the trees in our backyard bent completely sideways in a massive windstorm, one that apparently blew out the transformer that brought wonderful power to my coffeemaker.

I had to face to coffee geyser of doom. I wasn’t sure if I should be happy at my stove for being gas or angry at it for not being electric and saving me from trying the boiling fountain again. I made P. make the coffee for me.

It was only after I’d had some coffee that I realized that a lack of power might hinder our ablity to have breakfast, tree lights, and Christmas dinner. We walked upstairs. Apparently the explosions had woken P.’s parents from their early Christmas morning slumber. And his dad also wanted coffee. I was worried we were tempting the evil coffee gods at this point, but sent P. back down to make some more.

As if the wind and the explosions and boiling coffee fountain weren’t enough for a magical Christmas morning, we discovered that the tree had fallen over in the night. Not to worry that we broke our ornaments or anything, as we only have two and neither are breakable. 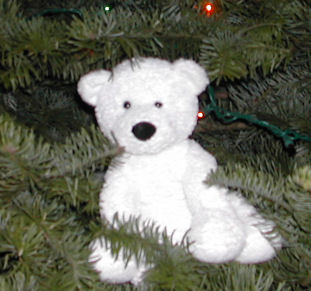 P. spent the next hour and a half on hold with the power company, dancing to the muzak. We had rolls for breakfast and opened our gifts in the natural light, by the slanted tree that we propped up against the wall. About four and a half hours later, the power came back on and we spent the rest of the day cooking.

And propping the tree back up.

Maybe Christmas doesn’t come from the power company. Maybe Christmas, perhaps, means… the explosions are minimal, there are no fountains of scalding coffee, we have muzak to dance to, and a polar bear to top the tree. 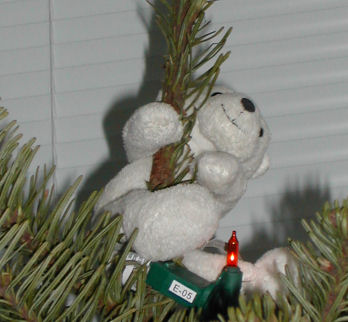