I found myself with nothing at all to do today. How great is that? So, I decided to spend the day cooking and writing. Whenever I make a list of recipes, I always go overboard, and I always gather ingredients for fifteen things, each of which requires several pounds of fresh vegetables. And even though I’ve been burned thousands of times before, I always end up with an entire refrigerator full of vegetables and no energy left to actually make anything.

Today was no exception.

The cashier did not look pleased. “You sure got a lot of vegetables.” I told him I was making stock. Which I was.

These are the vegetables I had left after making both vegetable and chicken stock. Not including the various bags of lettuce, spinach, basil, and snow peas. Or potatoes. And everything else that didn’t fit on the counter. 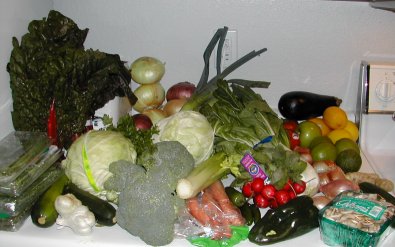 I got all the recipes from a Weight Watchers cookbook I have. After last night’s not particularly healthy Olive Garden extravaganza, I felt like I could use a few healthful meals.

What? You noticed lemon and limes in all that produce? They might not be for margaritas. You can do other things with citrus. Or so I’ve heard anyway.

It was hard to stay focused at the grocery store. Mmm… butternut squash! And I could make tortilla soup! And, OK, I’m already making twelve things. I’m not getting anything else. Not that I was talking to myself out loud. Much.

This reminds me of my current favorite informercial that is always playing at the gym. I think there’s a special station just for gyms that only plays informercials. Last night, I was trying to get P. to tell me who’s on his laminated list (Him: “I’ll just wait until she says yes and then I’ll tell you who she is.”) and when I suggested Jessica Simpson, he said, “well, she used to really have trouble with acne. But now that she’s using Proactiv, she looks pretty hot, so maybe.” That’s informercial overload right there.

My favorite informercial is for “the magic bullet”, which apparently is a food chopper, not a sex toy. In the commercial, a bunch of couples and someone’s mother in law are wandering into these people’s kitchen for breakfast, presumably because they’ve stayed over. I don’t think they’re strangers who got lost or anything. It’s not like a Rocky Horror Picture Show kind of thing. Although, the closed captioning isn’t really very reliable at the gym, so who knows.

The couple with the magic bullet are really perky and use their little chopper to scramble eggs and grind coffee and make smoothies and they keep talking about how it’s so teeny and takes up no counter space, but in reality, in order to make muffins and pancakes and bloody marys like they’re doing, you need 50 different attachments and bowls, and sure enough, that’s what you get. So, all that talk about how much room your regular blender takes up doesn’t mean a whole lot.

They also go on and on about how you don’t have to even touch a knife! Because they assume everyone is too stupid to notice that everything they’re putting in the magic bullet is pre-chopped. I mean, it’s about three inches across. You couldn’t fit anything in there without pre-chopping.

But the best part is that they keep making more and more food: nachos, alfredo sauce, until suddenly they’re making frozen margaritas (heathens; margaritas should never be frozen). And everyone is like “ooh, make me one!” and they all get sloshed even though it’s like 8 am and the coffee isn’t even brewed yet.

Anyway, my poor refrigerator is so packed full. I made a whole bunch of stuff: beef stew, chicken chowder, tortilla soup (yes, I gave in and bought outside the list at the store), creamed spinach, hummus, baba ghanouj. I’ll be capturing every riveting detail in the food log. And I have a whole lot left to make.

But maybe not tonight.