the water’s green and blue and calm and warm

I’m sitting in a beach chair under an umbrella, looking out at the ocean. The water is that turquoise, clear blue green like you see on postcards or the pages of resort web sites. As you swim (and the water is the perfect temperature for swimming), you can see all the way to the white sand.

It’s obscuring my view. The couple next to me (who have spent the morning singing to their baby) have escalated their annoyingness by leaving this toy directly in my line of vision. 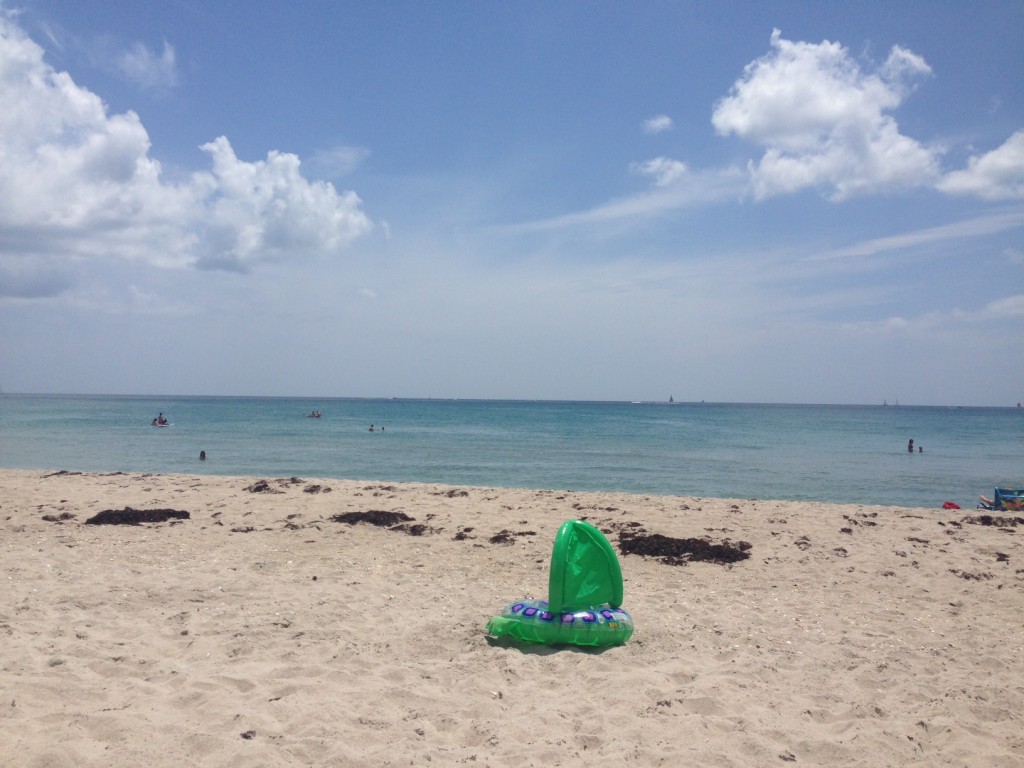 They’re terrible people and they’re turning my life into a tragedy. What have I ever done to deserve this?

I spend a lot of time feeling like I can’t count on anything. With relationships, sure. And work. But even with the minutiae of every day life. I walked up to the restaurant hostess stand last night and she said, same as it ever was: “is there something I can help you with?” And I’m filled with despair. Why can’t you just ask if I want a table and if so for how many? Why can’t you help me? Why will no one help me?

Can I not even count on people not to leave their inflatable green toys in front of my otherwise relaxed view of the sea?

My waitress this morning at breakfast was not great at her job. She was completely overwhelmed by her tables (she didn’t have that many tables) at least in part because she did everything inefficiently. She came over to ask if I was ready to order and when I said yes, she seemed surprised and said, oh, I’ll go get a paper and pen then. And then she stopped  and talked to three other tables on her way to get said pen and paper, and then stood there, somewhat lost as to how to get back to me. Later, she brought my food and then realized she hadn’t brought condiments and about 10 minutes later remembered to bring them.

Here’s the thing, though. She was doing the best that she could. Yes, she should carry an order pad with her all the time and yes, she should just bring condiments on the same tray as the food. But she hasn’t thought of that. Or hasn’t been taught it. Or whatever. But she’s not purposely trying to let me down.

My first night here, my room service never showed up. The person who took my order wrote the room number down wrong and tried to deliver it to the wrong room. Finally, after about an hour and a half, they figured it out and brought it to me.

The second day, I had been moved to a different room and this room had no room service menu. So I called and asked for one so I could order lunch. Only it never showed up. After an hour, I went downstairs and ordered lunch to go from the bar.

Dinner, still no menu (and I was avoiding the dining room due to its proximity to an extraordinarily loud high school reunion), so I tracked down the manager on duty, who coincidentally was also the head chef. I’m just trying to eat, I told him. I don’t understand why it has to be so hard. He was sympathetic, of course. So, two nights. Two free dinners. But I didn’t want free dinners. I just wanted to be able to order food and have it arrive and then be able to eat it.

The woman who brought dinner to my room the second night was astonished. How can everyone keep fucking up your desire to eat was her general feeling, although in nicer words. I know, I thought. The tragedy of my life.

Except that asshole baby who left his green inflatable toy in front of me. He was just messing with me on purpose.