Even though Pike Place Market is one of the hundred places to go before you die, I rarely go. Mostly because everyone wants to go there before they die, so it’s generally really crowded. And that wouldn’t be so bad, except that I go to shop for vegetables, and everyone else goes to look at things and take pictures. It’s difficult to pick out some good avocadoes, when, for instance, a guy is yelling at you to move because you’re in his shot. And then the relaxing pleasant day just becomes annoying.

But P. and I went yesterday, and I remembered that I really do like it, as long as I’m not in a hurry and remember a few basic guidelines.

We went to the market to see if anyone had any quince (they did) and to get a cheese board from Beecher’s Handmade Cheese. We also stumbled into La Buona Tavola, which is a shop with lots of flavored olive oils, truffle oil, and specialty Italian wine. We tasted their potato leek soup with white truffle oil, and ended up getting some white truffle cream, flavored olive oil, and a pinot grigio.

We stopped at Kell’s Irish Pub for lunch and then after that, stopped by The Tasting Room. I’ve been wanting to check it out for a while. I wasn’t missing much. There was absolutely no one there. I have never visited a tasting room that was completely empty before. There we stood, in a huge, completely empty room, with the one lone wine pourer guy (do you still call him a bartender? he does tend the bar, I guess) who ignored us. And the sterile, hollow feeling was magnified by the really cold air. I guess they were going for the wine cellar/our wines are so great they really need protecting aura, but I have been to many tasting rooms at many wineries that had a lot of wine stored there, and I’ve never felt as though I needed to don my snowboarding gear to feel comfortable.

Also, tastings were a minimum of $2 each (more for more expensive wine). Now, I have mixed feelings on the idea of charging for wine tasting. On the one hand, you don’t want to pour away all your profits. On the other hand, wine is very personal thing. You really have no way of knowing if you’re going to like it until you taste it. It doesn’t matter how expensive it is or how many points Wine Spectator gave it. So, wine tasting is a great marketing tool for wineries. People might shy away from trying new wine since they have to buy the bottle on faith and luck. But, when they try wine at a tasting and they like it, they might buy up several bottles as to avoid the overwhelming and confusing trip to the grocery store wine aisle. And they will file away the winery name for later use.

The Tasting Room could be a great marketing tool for the six wineries whose wines are featured. Tourists can be introduced to Washington wine; locals can make new discoveries. But at $2 a taste for a $13 bottle, not many people are going to experiment all that much. With a free tasting, or even five tastes for $5, you’re likely to try a few things that are different. There are approximately 25 ounces in a bottle of wine. This means that The Tasting Room is getting over $50 for that $13 bottle of wine. And while yes, I realize that they have to pay for the building and the inventory and the wine pourer guy, they’re also a wine store. They supposedly make their money on selling bottles of wine. The tasting is an extra benefit to help you choose what to buy. And it’s not as though they charge $2 per taste to average out their costs. More expensive bottles of wine cost more to taste. So, I’m not really surprised that the place was completely empty.

La Buona Tavola gave us an impromptu wine tasting with four Italian wines, and we ended up buying one. And because we had a good experience, and the er, wine pourer guy gave us a lot of information about the wineries and the wines, we’ll definitely go back. This place? Not so much. Generally, when you do a tasting, you get information about the wine, the winery, maybe even the vinyard and the wine maker. At The Tasting Room, for our $2 each, we got a grumpy old guy who we had to wave down to get tastes in the first place. And then we got silence. Not a word about the wines available to taste or about the wines we chose.

P. chose a 2000 dry riesling from Apex that doesn’t appear to even be listed on their site, so I can only assume someone found it in the back room gathering dust. (Actually, it could just be that their Web site sucks, because I was able to find a dry riesling under the awards section, but the link took me to a description of a late harvest riesling and the link to the late harvest riesling took me to a 404 error.) In any case, here was our assessment:

Me (swirling and sniffing): “Huh. It smells like leather. And not in a good way.”

Me (tasting and quickly handing back): “Ew. It tastes like leather.” (Imagine here not the new car leather smell, but more belt of a rodeo cowboy, with the big belt buckle and his name engraved on the back, after a long night of riding a bucking bronco.)

P: “I’ve heard wine described as leathery before, but I’ve never had wine that tasted like actual leather. Did you see that wine over there that was described as ‘tasting of leather and fur’?”

The Tasting Room Web site describes it like this: “A bright golden hue leads to a generous aroma of classic Riesling character, with apple blossoms, white peaches and lime. On the palate the mouth-watering acidity is balanced by melon and pear fruit flavors. This is truly a wine that calls for food.”

It’s like a real estate ad. You have to read between the lines. It calls for food means that you need something to mask the terrible taste.

I tried the Camaraderie Cellars Lake Crescent White, which the Tasting Room site describes as , well, “description unavailable”. And it has no vintage, which I guess should have been my first clue. Also, the Camaraderie Cellars site seems to have absolutely no mention of it. They do mention that the reason they haven’t won many awards is that they don’t submit their wine for many awards, because of submission fees and all. This wine was, however, better than the riesling in that it did not smell and taste like old leather. That’s about the best I can say for it.

We chose not to spend another $4 on wine that were clearly cast-offs. And besides, I was freezing. 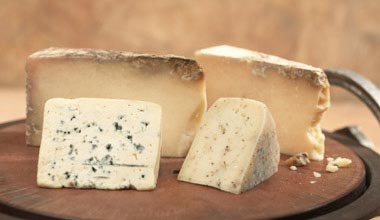 We then went to the cheese shop and got a few cheese accoutrements, as well as some basil chevre. In a freshing contrast to the grumpy wine guy, the cheese guy told us about the different chevres and which ones he liked best, and I bet he would have given us a taste for free had we asked. And then we found our quince and went home.

I realized that one reason I didn’t have a stressful hectic time is that we avoided the throwing-the-fish guys. When people think of Pike Place Market, they think of the guys throwing the fish. And every TV show or movie that features Seattle perpetuates this image. So, everyone comes to the market, and they stand at the entrance, a huge mass of people blocking the entrance, waiting for the fish. 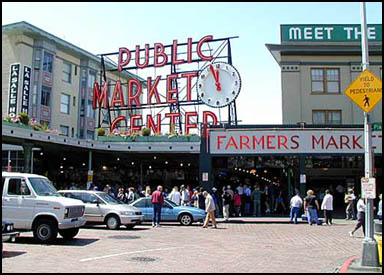 But here’s the thing, this huge crowd of people are not really in the market to buy fish, and the throwing occurs when someone points out a big ugly fish, stuck in the ice with its little frozen eyes staring blankly, and then the fish guy takes the fish and throws it to the guy who rings it up or wraps it in something or does whatever you do to fish when you sell it. I wouldn’t really know as I think fish is slimy and icky so I never really buy it. And neither does anyone standing in the crowd. And this is the problem. So the crowd gets bigger as everyone waits and waits and the fish guys are cranky with the “who’s going to buy a fish already, stop just standing around! you want to see me throw a fish? BUY A DAMN FISH.” And the crowd is cranky with the “we’re here to see you throw a fish. We’re tourists and we’ve read about the fish and we’ve seen the fish on TV so we know you throw them so just do it already! We have to catch the early bird special at Denny’s and it’s almost 5:00!”

It doesn’t make for a very relaxing atmosphere.

My advice, if you’re coming to Seattle for the first time, and you want to see fish thrown at the market, just walk on up and buy a fish. They’ll ship it right to your house with that dry ice stuff. Or, if maybe there’s someone you don’t like, a big ugly fish with those scary eyes arriving on their doorstep would be just the thing.

Or, if you want to see the market but don’t care so much about the fish, just go in a side entrance. There are side entrances about every ten feet. You bypass the big crowd and the fish guy attitude and you’re instantly in the market. And surrounded by many other fish counters where you probably pay less, although you may not get as much showmanship. If you feel like you missed out, you can always watch the fish flying online. 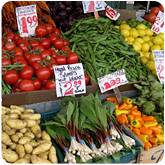 If you don’t need the touristy kitchy shops, you can bypass the main market building completely. You can just walk down the sidewalk on the other side of the cobblestone street and see just as many fish and produce dealers. It’s still crowded, but you’re outside, and there are fewer crowds standing around gawking, more crowds wandering around buying. And it’s that side of the street where you’ll find the place with the great Italian wine and the truffle oil and the handmade cheese. The side where I remembered that Pike Place Market can be fun.